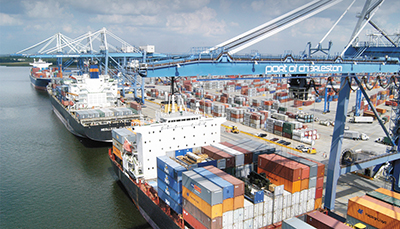 When the 1,102-foot-long Hannover Bridge sailed into the Port of Charleston on July 16, it marked a major milestone for the local maritime industry. It was the first “post-Panamax” ship to stop in Charleston | SC | USA since the completion of the $5.25 billion widening of the Panama Canal in June.

It may have been the first, but it won’t be the last. The larger class of vessels is expected to become routine in the Charleston region, which has the deepest harbor in the South Atlantic and is already handling ships that are more than 1,100-feet-long and 150-feet wide with drafts up to 48 feet. The bigger ships now account for more than half of the port’s annual traffic.

With the larger ships now able to pass through the canal, the Port of Charleston is well-positioned to capitalize on the new wave of traffic from the Pacific to the Atlantic and gain market share on West Coast ports in terms of imports coming directly from China and other Asian countries. The South Carolina Ports Authority (SCPA) is embarking on a massive $1.6 billion expansion to attract the super freighters into Charleston. This includes two new 155-feet cranes, which extend 40 feet higher and enable the Port to handle ships carrying 14,000 TEUs. The cranes arrived on Friday, will be operational by November, and two more will be added by December 2017.

What competitive advantages does the Port of Charleston offer companies entering the U.S. market?

To learn more about the Charleston region’s advantages for global logistics, click here.