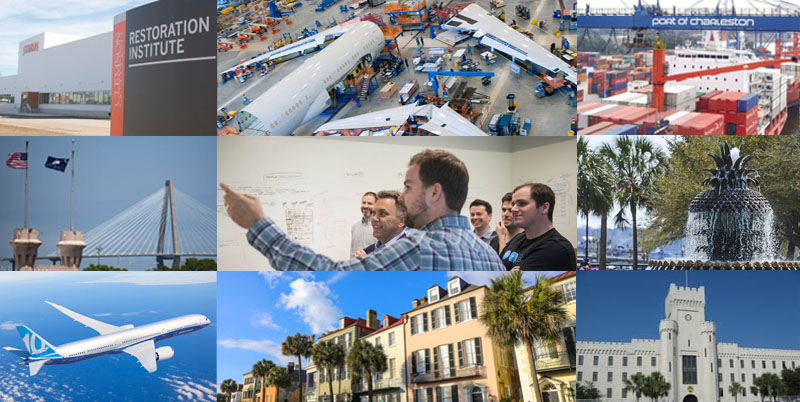 From aerospace suppliers, to pharmaceutical companies, to an influx of young professionals, 2014 served up countless growth opportunities to boost Charleston’s economic prosperity. Here are some of our favorite moments this year:

JANUARY: Citadel expands engineering curricula
The Citadel, the Military College of South Carolina, launched a new Bachelor of Science in Mechanical Engineering program, the first of its kind in the Lowcountry. As competitive global companies continue locating in the Charleston region this program will enable them to recruit top-notch skilled local talent.

MARCH: Boeing announces 2,000 more jobs in Charleston
The Boeing Company announced plans to bring an additional 2,000 jobs to the Charleston region, many in R&D, IT and engineering. Beyond job creation, Boeing SC is raising Charleston’s international exposure as companies come to pick up their locally made 787 Dreamliners.

APRIL: Charleston declared Hot Spot for millennials and real estate
USA Today recognized Charleston as a magnet city for millennials noting the metro is teeming with college-educated young people, who have come for the jobs and stayed for the lifestyle. naming Charleston one of the 20 hottest real estate spots in the world

MAY: Biomedical and aerospace growth
Flowers bloomed and so did May investments. Quebec-based specialty biopharmaceutical company, Aeterna Zentaris, announced a $1 million investment in Charleston to open its North American business and global commercial headquarters. Pacific Rim Aerospace also opened its Charleston office, expecting to create 100 jobs in the region. They will eventually open a second facility in North Charleston to continue supporting Boeing.

JUNE: All about that BIO
The CRDA touted the region’s growing biomed industry and competitive advantages for life sciences at the BIO Convention in San Diego. Concurrently, New World Pharmaceuticals and New World Consumer Products announced they will be locating their headquarters in Charleston, expecting to invest more than $21 million and create more than 38 new jobs over the next five years.

JULY: Charleston and Boeing become exclusive
Boeing announced it would build the 787-10 Dreamliner exclusively at its North Charleston plant. Design of the 787-10 is underway with final assembly of the first 787-10 scheduled to begin in 2017.

SEPTEMBER: Automotive supplier expands
TorqTek Design and Manufacturing, a supplier of timing gears to automotive manufacturers such as Harley Davidson and BMW, chose to invest $12 million to expand its North Charleston facility, creating an additional 50 jobs.

NOVEMBER: Port of Charleston grows connectivity and productivity
The Journal of Commerce ranked the Port of Charleston the third most productive port in the U.S. for the first half of 2014, as the Port’s container traffic continued to grow at an above-average rate. Added to a major U.S. East Coast/North Europe service by the Grand Alliance – a group of shipping companies – the Port also increased the frequency of weekly post-Panamax vessel calls.

DECEMBER: Boeing stays on schedule
Ending the year on a high note, an on-schedule milestone was met as Boeing began final assembly of the first 787-9 Dreamliner in North Charleston. Later this month, the aerospace giant also plans to open its 100,000-square-foot Research & Technology Center, initially employing 400 engineers and computer scientists.

Stay connected with the region’s latest #econdev news in 2015 by following @chsinspired on Twitter.