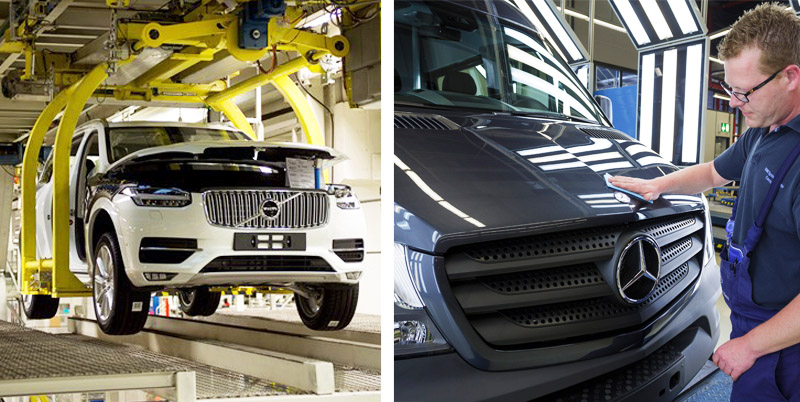 In recent months, the Charleston region has been selected for a number of new expansions/locations and made national/international rankings. It’s an exciting time of growth and opportunity in this community.

Since 2009, 10 new vehicle assembly plants have been announced in North America – eight in Mexico and two in Charleston | South Carolina | USA.

Swedish-based Volvo Cars recently chose the Charleston region for its first North American factory—a $500 million facility in Berkeley County expected to create up to 4,000 jobs in the coming years.

Beating out competitive locations for the win, the Charleston region was ultimately chosen for a number of reasons: “It was the total package: its logistics, its labor, its infrastructure, everything,” said Volvo Cars CEO Hakan Samuelsson in an interview with Bloomberg.

When production begins in late 2018, as many as 100,000 “Made in America” vehicles will be manufactured annually at the Berkeley County plant and shipped out of the deepwater Port of Charleston.

Volvo adds to our state’s experienced automotive community of 250 automakers and suppliers—making South Carolina the leading U.S. state for exports of both tires in automobiles. In the Charleston region alone, there are more than 100 automotive manufacturers and suppliers, including Robert Bosch and Cummins Turbo Technologies.

Volvo is not the first international automotive powerhouse to invest in the three-county Charleston region this year: in March, Germany’s Daimler, building on its long-term success in the region, announced expansion plans to build a $500 million Mercedes-Benz Sprinter vans OEM manufacturing plant in Charleston County.

The new facility, which will house a completely new body shop, a paint shop and an assembly line, will create 1,300 jobs. Daimler has successfully operated its van kit assembly operation in North Charleston for more than a decade.

Volvo and Daimler are just two of the many international companies choosing our region for their U.S. operations. In fact, this year Charleston ranked in the Top 10 Small American Cities of the Future for FDI Strategy by the Financial Time’s fDI Intelligence.

Their expansions are the most recent examples of the growth of advanced industries in the region. According to the Brookings Institution, the Charleston metro is among the Top 20 in the U.S. for advanced industries, which include automotive, aerospace, and digital services, like computer systems design and software.

We look forward to continuing to grow our region’s economic prosperity and welcoming more international advanced industry growth to Charleston | South Carolina | USA. If you are seeking to locate/expand your business, please contact Mike Graney at +1 843.760.4526 or [email protected].