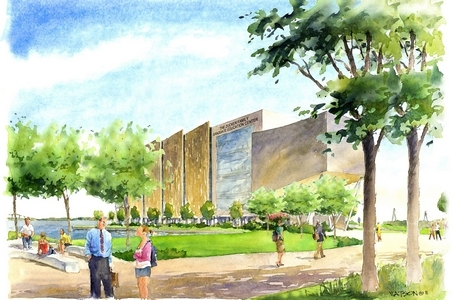 Dry dock number 3 doesn’t look like much now. The dusty pier on the former Navy base hosts a collection of recreational yachts on stilts, and in the water below, a wood piling juts at an irregular angle.

But thanks to a $5 million gift from a prominent local family, a next- generation building will soon rise from the brownfield site in North Charleston and cut a striking figure along the Cooper River.

It will be called the Zucker Family Graduate Education Center, and Lowcountry business, political and education leaders gathered on the riverfront plot Thursday morning to celebrate the woman behind the cornerstone funding.

The public-private project on the Clemson Restoration Institute Campus, which will cost a total of $20 million, is expected to open in 2014.

Anita Zucker, matriarch of the family and CEO of The InterTech Group, told the crowd how the project jibes with her family motto, tikkun olam, Hebrew for “repairing the world.”

“What better way to implement this mission than to provide education?” Zucker asked the 200-odd people gathered under a white tent where the building will sit.

Wearing a bright orange shirt and a tiger paw pin, the former schoolteacher called the opportunity to learn “that most precious of gifts.”

Encouraging other business leaders to join her, Zucker quoted Anne Frank, who died in the Holocaust Zucker’s parents survived.

“How wonderful that nobody need wait a single moment before starting to improve the world,” she said.

Clemson University President James Barker said the center will be the “heart and nerve center of the Restoration Institute.”

He described the CURI campus as a sort of coastal counterweight to the university’s International Center for Automotive Research in the Upstate. Both complexes, he said, demonstrate that economic development and education should be a “contact sport.”

“That’s what we found makes ICAR so successful,” he said of the collaboration between academics and industry. “They’re all going to be in one building here.”

The idea of the new center is that Clemson’s faculty and students will mix with cutting-edge industries to bring innovation quickly to market. Among the target fields are composite materials, advanced computing and energy systems, but the plans discussed Thursday seemed to be as evolving as they were expansive.

Clemson also envisions the center as a workforce development hub and a place where area students of all ages and scientists from all around the world can visit.

John Kelly, Clemson’s vice president for economic development and executive director of the Restoration Institute, said the university is still in the process of picking an architect for the 70,000 to 90,000 square-foot building but that proposals include an auditorium and a rooftop garden in addition to classrooms and offices.

He said Clemson is in talks with several companies about contributing to the building’s construction and taking space in it. Kelly would not offer a groundbreaking date but said the building would be ready to use in two years.

According to a commemorative video shown at the event, the Zuckers lived in a trailer when they first got married. But by the time Jerry Zucker died in 2008 and Anita Zucker took over The InterTech Group, the industrial conglomerate was one of the largest private companies in the United States. Earlier this year, Forbes Magazine estimated Zucker’s net worth at $1.8 billion.

Although the Zuckers have donated money to a wide variety of causes over the years and no doubt received at least as many solicitations, Clemson’s pitch stood out, Zucker said.

“They came to me with the most incredible proposal that touched everything that’s meaningful to my family and me,” she said.

But Zucker admitted she did have “ulterior motives”: companies within The InterTech Group’s portfolio, which includes the TIGHITCO factory under construction in Palmetto Commerce Park, need as many engineers and technical workers as they can get.

“My companies will benefit, so it makes sense,” she said.

That demand for high-tech workers is a recurring theme in the Lowcountry these days. Top companies, such as Boeing and DuPont, have opened factories here recently, and French cablemaker Nexans plans to open a factory just a few miles up the Cooper River in 2014. They all need competent local workers, a responsibility that falls to the local education institutions.

Medical University of South Carolina President Dr. Raymond Greenberg, who was one of several representatives from local colleges at the announcement, said the Citadel has an engineering program but that the master’s and Ph.D. degrees to be offered at the Zucker Center are sorely needed.

“If you want to move to the graduate level, that’s really the expertise that Clemson can bring to the table,” Greenberg said.

In the background of the ceremony, construction continued on Clemson’s wind-turbine drivetrain testing facility, the spark and eventual centerpiece of the CURI complex.

When completed next year, the facility, featuring a 7.5- and a 15-megawatt test rig, will be the largest of its kind in the world. Other plans for the campus include a 15-megawatt grid simulator.

“But when you have stuff like this happen, you’re just glad there’s a plan,” he said.