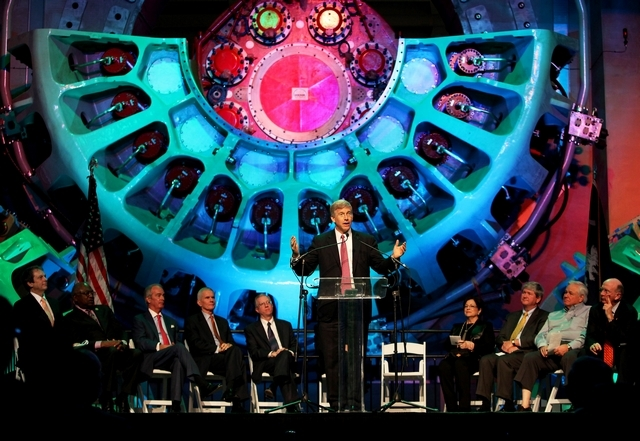 More than a 1,000 people were awed by the sheer size of the massive equipment inside Clemson University’s new wind turbine drivetrain testing facility when they first saw it Thursday.

The university dedicated the 82,000-square-foot building, named the SCE&G Energy Innovation Center, a project that has been in the works for four years. SCE&G supported the center with a $3.5 million gift.

Clemson University President Jim Barker, who will retire in January after leading the upstate university for 14 years, said the opening of the more-than-$100 million facility on the former Navy base in North Charleston is one the highlights of his career at Clemson.

Find out why a more than $100 million facility was built in North Charleston to test giant wind turbines, in a state with no wind farms, in a nation with no offshore wind power.

But local leaders were looking at the potential for economic development, and many them expressed hope that the center ultimately would lead to new jobs, and lots of them.

Clemson officials said the new North Charleston energy campus, which will include the new facility and a few other buildings, eventually will have about 70 employees and 200 graduate students. But local elected officials and business leaders think it will inspire other energy-related businesses to set up shop nearby.

The center also has a “grid simulator,” where the electrical functions of the wind turbine drivetrains can be tested for their potential impact on the electric grid.

But manufacturers of large-scale electrical equipment also can pay Clemson to test their equipment in a setting that responds like the national grid. The simulator allows the products to be tested, but their deficiencies can’t harm the grid.

That service also will bring in money for activities at Clemson’s North Charleston campus, said Nick Rigas, Clemson Restoration Institute’s executive director. “Clemson’s mission is for it to be self-sufficient.”

The grid simulator has been named the Duke Energy eGRID.

U.S. Rep. Jim Clyburn, D-S.C., one of the speakers at the dedication, said many leaders feel the country’s future is closely tied to new forms of energy, and “we need to create a smorgasbord of energy.” Wind energy is one of the items on the smorgasbord, he said. “I was so proud when a university in South Carolina was given the (federal) grant to launch the facility,” Clyburn said.

Clemson originally requested a $100 million grant, he said, but received only $45 million. But the university leveraged that money to raise the rest. “When South Carolinians get the opportunity to compete, we always do well.”

Daniel Poneman, U.S. deputy secretary of energy, was the keynote speaker. He said wind energy “is not some fantasy about our future. Wind energy, he said, is here.

More than 80,000 Americans are now employed in the wind energy field, he said. And 40 percent of all new alternative power comes from the wind. Clemson’s facility is top-notch, he said. “I travel a lot and I’ve been to a lot of wind facilities, but let me tell you, this is impressive.”