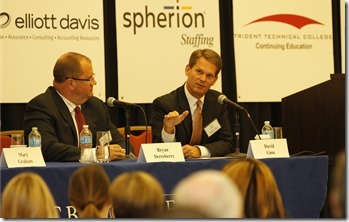 When the president and CEO of the Charleston Regional Development Alliance travels around the world, he hears a lot of good things about Charleston that help him sell the region.

But David Ginn said one question troubles him more than any other after the congratulations quiet down: “Can you sustain the education and the transportation and infrastructure networks to sustain where you are 10, 20 years out?”

Ginn was on a panel of speakers for Thursday’s Charleston Regional Business Journal Power Breakfast, which served as the launch for the fourth Regional Economic Scorecard. The scorecard uses independently gathered and academically verified data to compare the Charleston region with other similar regions.

“We have grown significantly. We have outpaced the U.S. by almost seven points and outpaced all of the comparative metros that you’ll see in that report,” said Steve Warner, CRDA’s vice president for global marketing. “This is really, really strong. It means our economy is growing.”

“The reason we do this is to provide unbiased data for our community leaders so that we can have a hard look at how we’re really doing in a competitive context,” Warner said. “We look at six Southeastern metro areas that have similar assets and similar size.”

The scorecard also compares the area to two leading communities that generally outpace the others, Austin, Texas, and Raleigh, N.C.

“We talk about those communities a lot. We do because those economies are top-five-performing economies year in and year out,” Warner said.

The CRDA partnered with the Lowcountry Graduate Center and the Riley Center for Livable Communities at the College of Charleston for data collection and analysis. SC Biz News, which owns the Charleston Regional Business Journal, produced the scorecard.

Data on earnings per worker also moved in a positive direction, Warner said, with the Charleston region posting 21.5% growth compared with U.S. growth of 0.1% since 2005. The Charleston area outpaced all the metros surveyed, with the exception of Savannah.

Regional job growth outpaced the nation, at 11.5% compared with 0.5%, and the region doubled and tripled comparative metros, he said.

Warner also cited 2010-2012 export growth data, which includes goods and services sold that bring foreign money into the local economy, and not container volume, which represents exports and imports. During that time, Charleston grew 32.7%, to $3.9 billion in gross regional product.

“We have achieved that economic growth that we want to as a community, and now the challenge is how do we sustain it?” Graham said.

Transportation issues cost businesses and their workers money and are vital concerns for companies considering moving to Charleston, said Bryan Derreberry, president and CEO of the Charleston Metro Chamber of Commerce, who also sat on the panel.

Total costs for commuters in the Charleston region increased almost 25% between 2005 and 2011, Graham said. Overall costs are estimated at $240 million. She said that’s a threat to the region’s current economy and the growth coming.

“Our economy is doing great, and as a result, we have lots of people that want to live here now,” Graham said. “So our traffic congestion is not getting better, it’s getting worse.”

She said the region is growing at three times the national average, according to the chamber’s Center for Business Research, which estimates the Charleston metro area will have more than 1 million people within 15 years, compared with roughly 700,000 people currently.

“That’s not a small Southern community any longer,” she said. “That’s a major metropolitan area, and we’ve got to do something to handle the additional traffic and congestion that’s coming.”

Education, innovation and livability are closely tied to talent, Derreberry said. You can’t fix transportation, which could help attract talent, if you don’t address affordable housing issues, for example.

“Each of these gauges is kind of like a treadmill,” Derreberry said, referring to the scorecard’s indices. “I would love to tell you, you finally get well-trained and fit with each gauge and you’re finished. The reality today, when you talk to employers in this room, and we’ve spoken to over 200 in the last two years, talent is still the No. 1 issue.”

Derreberry said education, reaching from early childhood to higher education, will always be an important issue for the Charleston region.

Warner said the Austin metro area performs well on all measurements because it has quality of life and affordability, as well a research university system with 135,000 students at any given time. Raleigh has three top-tier research universities that are pumping out 25,000 graduates a year combined.