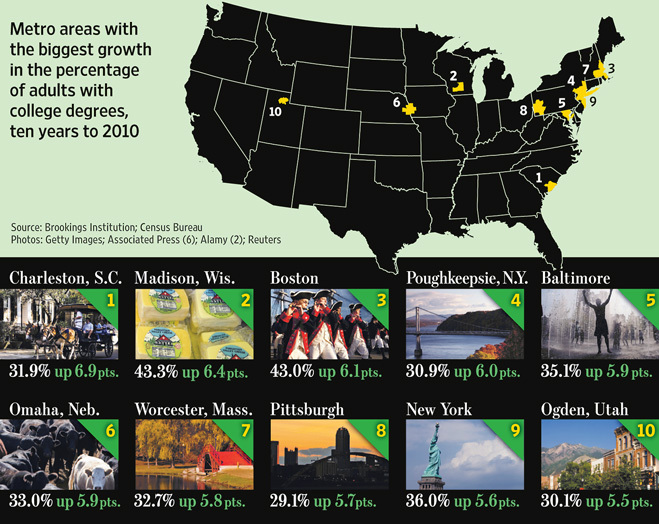 Despite a decade of technological advances that make it possible to work almost anywhere, many of the nation’s most educated people continue to cluster in a handful of dominant metropolitan areas such as Boston, New York and California’s Silicon Valley, according to census data released Thursday.

The upshot is that regions with the most skilled and highly paid workers continue to widen their advantages over less well-endowed locales.
“In a knowledge economy, success breeds success,” said Alan Berube, a senior fellow at the Brookings Institution in Washington, D.C.

6%: Decline in births among women aged 20 to 34 from 2008 through 2010.
All of this came during a decade in which an increasing share of America’s wealth and population continued its shift toward cities, while rural areas in the Great Plains and Mississippi Delta continued to hollow out. The U.S. added 27 million people over the decade, but metro areas—defined as the collection of small cities and suburbs that surround an urban core with at least 50,000 people—accounted for most of the population gain.

Poverty has also spread in the wake of the recession and weak recovery. In 2007, before the recession started, 80 of the nation’s 100 largest metropolitan areas had poverty rates above 10%, and the worst pockets tended to be concentrated in the South and Midwest. Since then, 15 more metro areas have seen poverty rates climb above 10%, with large increases in Florida and California, both of which were hard hit by the housing bust. The poverty rate in Cape Coral-Fort Myers, Fla., for instance, jumped to 17% last year from 10% in 2007.

Thursday’s data were released as part of the Census Bureau’s American Community Survey, the government’s most comprehensive snapshot of economic, social and demographic trends. The data include everything from commute times to fertility rates.

Among other highlights of the new data: Younger women of almost every race and education group had fewer children in 2010 than in 2008, according to an analysis of census data by Kenneth Johnson, senior demographer at the Carsey Institute at the University of New Hampshire.

During that time, there was a 6% decline in births—about 200,000 fewer babies—among women between 20 and 34, even though the number of women in that age group grew by more than one million. That shift is most likely because the recession is prompting young women to put off motherhood for better times, and contrasts with women between 35 and 50, for whom fertility rates were essentially flat.

15: Metro areas where poverty rate has climbed above 10% since recession.
The newly released census data also showed that immigration to the U.S. has snapped back following a decline during the worst year of the recession. The U.S. added 1.4 million immigrants in 2010, versus 556,000 in 2009 and a decline of nearly 100,000 in 2008, according to an analysis of the data by William Frey, a demographer at the Brookings Institution. That was the biggest gain in immigrants since 2006.

The decade’s shift in education reflects the growth of good-paying jobs in areas like technology and higher-end services, as well as the continued decline of manufacturing industries, which have lower educational requirements but typically pay relatively high wages to workers who didn’t go to college.
While manufacturing saw an upswing in the aftermath of the recession, the longer-term movement toward automation and overseas labor remains a hallmark of the decade.

The pattern of smart cities becoming more dominant is a departure from past trends, noted Edward Glaeser, an economist at Harvard University. Through the first part of the 20th century, jobs and wealth clustered around places like Detroit and Cleveland that had large concentrations of capital and industry. Today, a city’s overall education level and supply of higher-skilled labor are the big drivers of its economic success.