More than a photo-op: Participating in JB Charleston’s mobility exercise 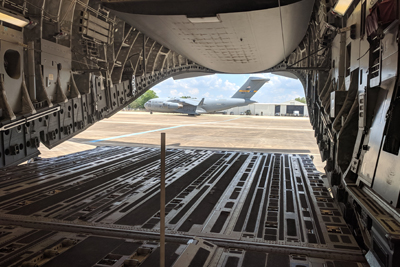 “What I can do for my country, I am willing to do.” My recent experience brings layers of meaning to these words from South Carolina Patriot Christopher Gadsden. How often do you ask yourself and reflect on what you personally are willing to do for your country? I have reflected on that very question since participating in the C-17 formation that flew over the Ravenel Bridge, the Statehouse, and to Louisiana in late May. The leaders of Joint Base Charleston graciously included a group of local elected officials, media, and several of us from the Honorary Commanders program in this mission.

To say I cleared the calendar when the invitation came would be an understatement. This is just the type of event I hoped to experience when I signed up for the Honorary Commanders program. This program encourages an exchange of ideas and experiences between community and military leaders, providing a unique opportunity for Charleston civics to shadow military commanders across the installation and, in this case, fly in a C-17. We witnessed the plane’s back ramp open over the Ravenel Bridge, paratroopers exiting the aircraft over Louisiana, and a mid-air refueling on the return trip. While all were spectacular feats, through it all I was reminded this was more than a photo op. In fact, the crews of the C-17’s were preparing mobility forces for tomorrow’s battles, enhancing partnerships with Army units, and working to sustain the global mobility and superiority our forces enjoy. And while it was awe inspiring for us, this was about executing Tuesday’s mission for our crew.

I was struck by their laser focus. I enjoyed chatting with Airman 1st Class Janet Escobedo, a structural maintenance apprentice from El Paso, TX, who spoke about being “in awe” of being able to work on multi-million dollar aircraft every day. She told me the strangest repair she’d made was fixing a nose cone that an unfortunate bird crashed through. After seven months in Charleston, this first generation military member was always excited about the challenge tomorrow would bring.

The economic impact of our military in Charleston is well documented. In fact, there are more military personnel in the region now than when the Navy Base closed and hopefully the situation will remain that way. The work these men and women do is both valuable to our region and critical to our nation’s security. It was a privilege to see it firsthand.

Again, I ask, how often do you pause and reflect on what you personally are willing to do for your country? The airmen we met put their lives on the line so all of us will remain safe and free. I would ask that you join me in supporting their efforts, and if you get the opportunity to give back or say “Thanks” don’t hesitate, because they never do.

“Our flag does not fly because the wind moves it. It flies with the last breath of each soldier who died protecting it.” – Unknown