The Sky is Not the Limit – Aerospace Takes Off in Charleston 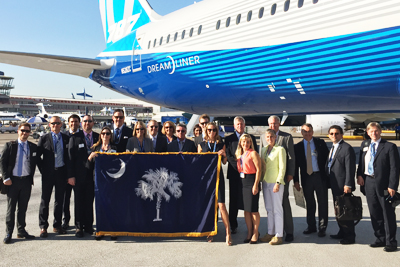 At last month’s Paris Air Show, Boeing dominated the news with record orders and bullish plans for its middle of the market aircraft. They continue to be a strong economic driver for the Charleston metro. Boeing’s decision to locate its 787 Dreamliner Final Assembly and Delivery facility in the Charleston region arguably put our metro “on the map” for major corporate location and expansion opportunities. Automotive, advanced materials, and life science sectors are fast growing, but Boeing’s decision made aerospace Charleston’s top high impact cluster since 2009.

Boeing recently tested the first 787-10, the newest, largest and most efficient of the Dreamliner series, which is made exclusively in North Charleston. Boeing has orders for over 150 “Dash Ten’s”. Since the Dash Ten is through design and into final assembly, Boeing has released 200 engineers from the program—good news for the other aerospace and advanced manufacturing firms in the region. Boeing still employs hundreds of aerospace engineers and computer scientists at its prestigious Boeing Research and Technology (“BRT”) Center in North Charleston.

South Carolina Secretary of Commerce Bobby Hitt is fond of saying that “the sky is the limit” for the state’s aerospace industry. A Boeing executive, with an eye on their space program, corrected Secretary Hitt and said, “the sky is not the limit.” That’s an apt descriptor for the countless aerospace opportunities in the Charleston market.