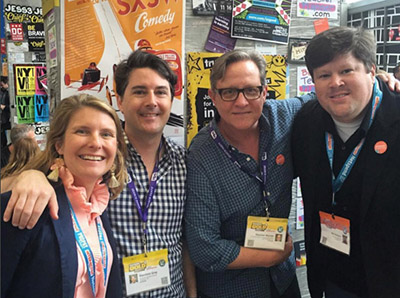 Each March, the South X Southwest (SXSW) 13-day Music, Film and Interactive Festival attracts 80,000 of the world’s leading creative professionals to Austin for a series of conferences, trade shows, job fairs and special events.  The Interactive segment is now the largest, and most celebrated, venue for showcasing the latest tech innovations (Twitter in 2007 and Foursquare in 2009 were launched at SXSW).

I attended SXSW this year with Charleston allies Stan Gray and Harriott Parker of DIG SOUTH, Buff Ross of AllOneWordDesign, and Lee Deas and Will Bullock of Obviouslee Marketing to scout the event, learn about the latest developments, promote Charleston’s emerging tech sector, and support Charleston Open Source, our collaborative talent recruitment initiative.

A few highlights from this year’s event: While our crew spread out and attended as many of the keynotes, panels, demos, late night parties, and taco trucks as possible, we also promoted Charleston Open Source with a guerrilla marketing campaign and digital “Lucky Dog’ sweepstakes, giving SXSW attendees a chance to win a trip to Charleston for DIG SOUTH Interactive and experience the Charleston tech sector up close and personal. Congratulations to our lucky winner Heather Wilde with ROCeteer, who will be visiting us for the 2016 DIG SOUTH; thanks to our sponsors: DIG SOUTH, Hyatt Hotels, Southwest Air, and Wildsam Guides.

Stayed tuned for more Charleston tech news as DIG SOUTH is right around the corner, April 26-28.