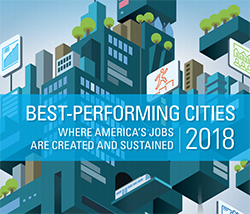 Interestingly, the Charleston region with 775,000 residents ranks ahead of #25 Nashville, with a population of 1.9 million. Nashville figured prominently in a recent New York Times article, “Nashville’s Star Rises as Midsize Cities Break Into Winners and Losers.”

The overall theme of the article is that the most successful metros are exerting a kind of economic gravity for the best jobs and the most talented workers. This mirrors studies from the Brooking Institution on regional inequalities and the new geographies of jobs.

It would be easy to substitute “Charleston” for “Nashville” in much of the article. For example, “beginning in the 1990’s, political, business and nonprofit leaders [worked] to promote the region; state and local leaders adopted a regional approach to economic development; and [the state] overhauled its college system and work force development efforts to align better with the jobs being created.”

This “winning recipe” includes a creative class of artists, designers, and entrepreneurs; the importance of civic leadership; and the advantages of elite colleges & universities located in the metro – all which ring true for the Charleston metro’s recent history and continued evolution.

The hard-won economic diversity and momentum noted by Milken, the result of ongoing and aligned efforts by private sector, public sector, non-profit and academic allies, has been a strategic focus of regional economic development efforts since the Charleston Naval Yard closure in the mid-1990’s. And that work continues to be a focus of our One Region Competitiveness Strategy, and a vision for our metro as a unified, globally competitive region where both businesses and people flourish.

To learn more about the One Region Strategy, visit OneRegionStrategy.com.