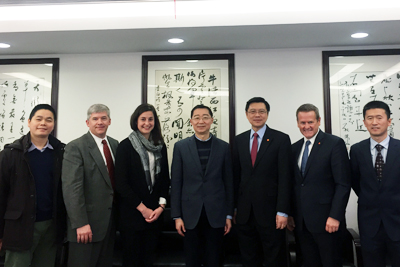 Recently, the Charleston Regional Development Alliance was invited to join a five-day automotive industry trip to the Chinese coastal city of Ningbo in the Zhejiang province. Ningbo is home to 3,000+ automotive suppliers, including one of the production facilities for Geely Holding Group Co., the Chinese owner of Volvo Cars.

The trip was organized by Clemson University’s Center for China Studies and the Ningbo Municipal Administration with the goal of further developing relationships between the state of South Carolina and China’s automotive cluster.

The Ningbo Municipal Administration organized a comprehensive itinerary for our visit, which included:

Our delegation also had an opportunity to tell the story of the automotive industry in South Carolina, including the two most recent automotive announcements in the Charleston region, and describe the strong existing trade relationship between Ningbo and our state. Throughout the exchange, we discussed the global cooperation which will be necessary for the industrial transformation and new wave of upgrading in the automotive industry.

As Charleston’s automotive cluster continues to grow and expand, it is important for our region to understand the global orientation on the automotive industry and to build relationships beyond our borders.