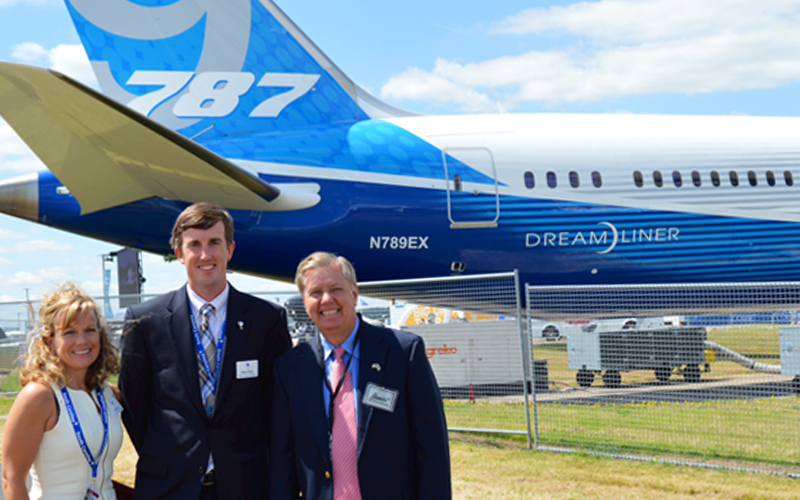 This month, the Charleston Regional Development Alliance joined the South Carolina Delegation at Farnborough International Airshow—one of the largest aerospace exhibitions in the world. At the show, the CRDA met with international aerospace companies to discuss the exciting expansion and relocation opportunities in the region.

Between 2007 and 2012, South Carolina’s aerospace industry was the fastest growing in the nation, largely thanks to Boeing, which has been instrumental in establishing the Charleston region as a major player in the industry. Since locating to North Charleston, the aerospace giant has only continued to grow:

As Boeing’s work in Charleston continues to diversify, so does the market’s aerospace sector. In this year alone, Charleston has welcomed a handful of aerospace supplier expansions to the region:

Senior Aerospace with the South Carolina delegation at Farnborough 2014.

To fill the demand for high-skilled workers in this fast-growing industry, Charleston offers some of the most experienced workforce training programs in the nation, for example the renowned readySC program, Trident Technical College’s Aeronautical Studies Division and the Embry-Riddle Aeronautical University Charleston Campus. Aerospace engineering curriculum is also available for 9th-12th grade students at select high schools in the region.

To learn more about our region’s aerospace industry, check out the data on Charleston’s aviation footprint on our sector page here. Need additional information? Contact us with your inquiries.